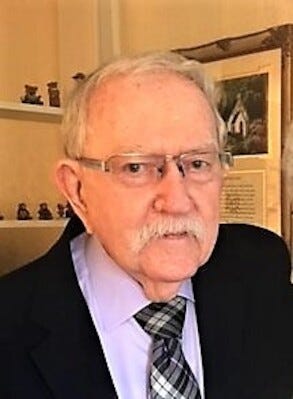 Wayne H. Clouser, known as “Mr. C,” a well-known 89-year-old public accountant, passed away peacefully on Thursday, August 4, 2022, in hospice care surrounded by a loving family. He was predeceased by his wife, Bernice, of 59, and they were blessed with three children, Andrew (Robertha), Gloria and Leigh Shaffer (Jack), 8 grandchildren and several great-grandchildren. -loving children. Wayne was born in Modoc, Indiana on October 2, 1932, into a family of 13 children. Ambitious and a good student in high school, he also enjoyed sports, participating as the manager of the basketball team. He worked on the family farm, surrounding farms and in a chicken processing plant. This allowed him to buy his own house before the age of 18. Unfortunately, an agricultural accident caused hearing loss in both ears due to poor medical care at the time. He was able to regain his hearing after an operation later in life. After being diagnosed with another health condition, asthma, he pulled out piles and moved to Tucson, Arizona in 1950. There he met Bernice and they began to have a family together. He enrolled at Lamson Business College where he graduated at the top of his class and was encouraged to attend the University of Arizona by his professor. At UofA, he graduated in 1960 with honors and served as president of Alpha Kappa Psi, a business fraternity. After graduating, he was offered a position with the number 5 national accounting firm, Arthur Andersen. He and Bernice quit their part-time jobs in Tucson and moved with the children to Phoenix where Arthur Andersen was based. After 2 years with Arthur Andersen, Wayne ventured out on his own, renting an office and then buying a building in 1962 where he completed 59 years of accounting service. Due to health reasons, he retired and sold his business in early 2021. Wayne’s career, while rewarding and accomplished, still found time to give back to the community. He has served on the Phoenix School Board, treasurer of the Phoenix Little Theater, president of the VESTA Club, Toastmasters participant, served on the Arizona/Mexico Commission and the Institute of Certified Public Accountants of Arizona. Faith was important to Wayne and Bernice who were members of Biltmore Nazarene Church and later attended pinchot Hispanic Church of the Nazarene. He drove the church van for several years and served in the Latin America Southwest District as treasurer. Wayne survived many challenges and fought many battles, but surviving 3 different forms of cancer was insurmountable. In lieu of flowers, please donate to the American Cancer Society or Hospice of the Valley. Wayne H. Clouser, a man of courage, generosity, devotion, a friend of many and loved by all. A life well lived! Visitation will be on Sunday, August 28, 2022 from 4:00 p.m. to 7:00 p.m. at Whitney & Murphy Funeral Home. The memorial service will be held Monday, August 29, 2022 at 10:00 a.m. at the Whitney & Murphy Funeral Home, 4800 E. Indian School Road, Phoenix. Reception will follow immediately from 11:00 a.m. to 1:00 p.m. Interment will be at 1:30 p.m., all are invited to join the cortege at Green Acres Cemetery, 401 N. Hayden Road, Scottsdale. Condolences may be expressed at www.whitneymurphyfuneralhome.com