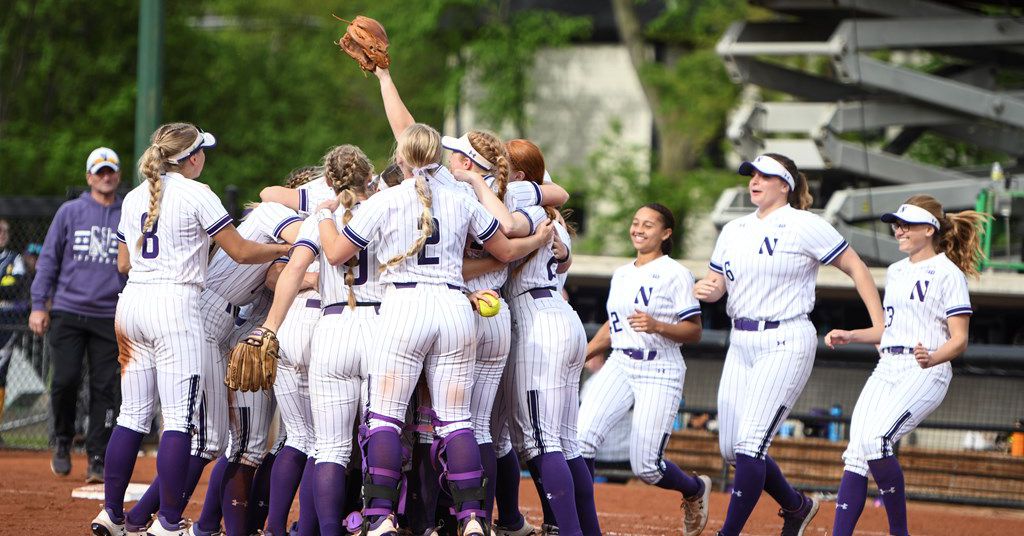 The No. 9 Cats took full advantage of their final weekend at the J, crushing their competition to go 3-0 in the Evanston area and advance into the double-elimination bracket.

Northwestern took on Oakland in the first round with no mercy. The ‘Cats put runs on the board from the get-go, with slugger Rachel Lewis hitting an RBI triple and catcher Jordyn Rudd driving it home on an RBI pitch late in the first inning.

Oakland tied the game in the top of the third after a shaky streak for star pitcher Danielle Williams. After hitting two batters, the senior allowed a single down the right field line that brought two RBIs to tie the score in the bottom of the third.

Nonetheless, the ‘Cats got away with him in the fifth with a three-run RBI home run for Maeve Nelson — her second of the day — and another RBI single for freshman Grace Nieto, with two runs thanks to an error of pitch by the Grizzlies. Despite a tough third inning, Williams had a stellar outing for the ‘Cats with eight strikeouts and just four hits, sealing the 9-2 win.

Northwestern faced McNeese in the winners’ bracket on Saturday. Despite Notre Dame’s decision the day before, the Cowgirls were no match for the ‘Cats’ stinging bats, as Northwestern won by run rule, 17-3, in five innings.

Senior Skyler Shellmyer started the game strong, finishing third and flying second. She was brought home on a single by Rudd to put the ‘Cats ahead with a 1-0 lead.

In the top of the second, left fielder Angela Zedak reached a drop fly ball to right field, allowing her to advance to third. Hannah Cady hit an RBI on the ground to bring the junior home while Nieto and Shellmyer rolled the ball on two hit singles, putting them third and second, respectively. Northwestern remained aggressive on the base path with Nieto scoring on wild pitch and Shellmyer stealing home later. The ‘Cats scored two more in the third, thanks to a solo shot from Nikki Cuchran and doubles from Cady and Sydney Supple.

After McNeese drove home three in the bottom of the third, Northwestern came back with a vengeance, recording a nine-run inning in the top of the fourth. With the top of the line-up, Shellmyer picked up third place and showed her speed by stealing second place. Rudd homered two RBIs to left field followed by a two-RBI Cady single, with a third on a field error by McNeese’s catcher. Souple continued the run, hitting a single to drive Cady home. Nieto and Shellmyer made it to base before Lewis hit a double on a double down the left field line. Northwestern scored one more on a sacrifice fly from Rudd before the action-packed round was over.

The fifth couldn’t come fast enough for the run rule to go into effect, but the ‘Cats took every opportunity for more at-bats. Freshman Ayana Lindsey came in for a pinch hit, and she knew exactly what to do in her first-ever NCAA tournament shelf appearance, hitting a monstrous two-RBI homer to complete the day’s score, sending the ‘Cats at the championship game. The win also marked the Drohan sisters’ 700th victory with the program, a milestone few coaches earn in their own NCAA region.

McNeese won his second contest on Saturday, however, beating ND for the second time, and faced the ‘Cats again on Sunday. However, NU saw the end in sight and showed no mercy. As usual, Shellmyer started strong, hitting a single at second base. The ‘Cats managed to put one on the board on a Nelson single, ending the inning with a 1-0 lead.

The game remained without action until the bottom of the third with the top of the lineup returning for the ‘Cats, making four runs in the inning on a two-run double RBI by Rudd. The Cowgirls managed to score a run in the top of the fourth but the ‘Cats showed they wanted more. Northwestern fought back with five runs in the bottom of the fourth on a Lewis three-run homer and a Zedak two-run homer, earning him a spot in the coveted Roof Club. Northwestern’s defense clinched him in the top of the fifth, ending the game with a run-rule victory.

Naming a weekend MVP for the ‘Cats is extremely difficult considering the impact so many players have had. Nieto led the team with a .714 batting average, Shellmyer went 7-for-7 against McNeese with six runs scored and four stolen, Nelson hit two homers and recorded five RBIs on the weekend, Williams had three wins and 18 strikeouts and Lewis came out with a bang, with his last at bat at The J a three-run homer against Welsh-Ryan.

And now, off to Tempe. The ‘Cats travel to Arizona this weekend to take on No. 8 Arizona State in a best-of-three series in the Super Regional. Arizona State went 3-0 in their regional, beating Cal State Fullerton and San Diego State, then defeating SDSU again in the championship game 8-4 to emerge unscathed.

True freshman pitcher Mac Morgan started for the Sun Devils in the series opener and final. Morgan pitched two full games with a total of nine strikeouts and six runs allowed over the weekend. Those two wins lifted his season record to 18-3 and his ERA to 2.73. The Sun Devils rely a lot more on their pitching rotation than Northwestern, which could be important if the streak extends to Game 3.

Offensively, Cydney Sanders is a force to be reckoned with. The first baseman has a .424 batting average on the season with a total of 21 home runs – tying home run leader Big Ten Lewis – and 63 RBIs. Last weekend in the Tempe Regional, Sanders homered two RBIs, two singles, a double and was walked four times.

If the ‘Cats can get out of Tempe, they’ll move on to the Women’s College World Series. It’s a long road to the national championship, but Kate Drohan’s team is taking it one step at a time, and they look scary doing it.