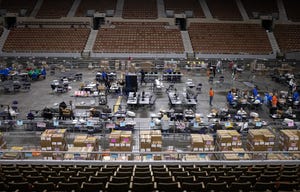 “Democracy in Doubt,” a series of stories chronicling the 2020 election recount in Arizona, was actually named a finalist in two categories: First Amendment Distinguished Service and Local/Regional Investigative Reporting.

“Draining the Forests,” a joint effort of four Gannett newspapers, including The Republic, was named a finalist in the environmental reporting category.

The winners will be announced on June 12 during an online broadcast.

“The Scripps Howard Awards showcase incredible, life-changing journalism,” said Liz Carter, president and CEO of the Scripps Howard Foundation. “This year’s show will take American audiences behind the scenes with some of our country’s most dedicated journalists and up close with those affected by their work. It will be a memorable evening. »

“We are honored to be considered for recognition in three categories and look forward to more people reading work that exposes wrongdoing and holds government accountable for harming public forests and undermining our democracy,” said Greg. Burton, editor of The Arizona Republic. “The journalists who produced this work spent months navigating difficult terrain and battling the recalcitrant Arizona Senate. Above all, I am grateful that their work continues to be celebrated.

“Democracy in Doubt” will compete in the First Amendment Distinguished Service category against “On Our Watch,” a radio show and now a podcast on law enforcement misconduct produced by KQED and NPR, and “Birth & Betrayal “, a series about children who suffered catastrophic brain damage published by the Miami Herald and ProPublica.

In the local/regional investigation category, the other finalists are “House of Cards,” a story about the collapse of a condo tower in South Florida by the Miami Herald and “Black children were imprisoned for a Crime That Doesn’t Exist,” which was produced by WPLN News and Nashville Public Radio’s ProPublica.

For most of 2021, Arizona has served as the starting point for a bold partisan effort to rewrite the 2020 presidential election. Throughout this national spectacle, The Republic has served as a bulwark against the unprecedented onslaught against democracy itself.

The Republic press team has documented the sprawling efforts of former President Donald Trump’s allies to overturn Arizona’s presidential vote, the closest in the nation. The newspaper sought access, documentation, and truth despite enormous odds to tell stories that shed light on the fundamental problems with Arizona’s electoral “audit” and the ulterior motives of its architects.

With “Democracy in doubt”, journalists from the Republic revisited the days immediately following the November 2020 elections. Drawing on local relationships that, in some cases, date back more than a decade and on well-connected sources in Washington, they polled those who were in and around the scrutiny of the ballot from the start. They sifted through documents, emails and text messages and secured exclusive interviews with leading principals to dramatically reveal how events unfolded.

What emerged is a chilling tale of a plot hatched before the results were in, dragged out until the Jan. 6 insurrection and played out with partisan amateurs leafing through ballot papers in the desert heat to bolster unfounded allegations of electoral fraud. The series focused on elected officials who resisted the White House’s pressure campaign and those who sought a dangerous compromise.

Republic’s work detailed the pressure on Arizona politicians from unprecedented perspectives — that of the Arizona House speaker, for example, and the former chairman of the Maricopa County Board of Supervisors. , who both rejected the pressure campaigns. They also spoke to the Republican state senator who was solely responsible for the agency not despising the oversight board.

The Republic detailed the fallout for everyone involved: from petty slights and death threats for those who resisted to those who pushed for ballot revisions, celebrity status and Trump endorsements for Republicans who resisted. monitoring.

Along with The Coloradoan, The Desert Sun and The Spectrum, The Republic revealed how the US Forest Service – increasingly distracted by wildfires – ignored its responsibility to protect the rivers and streams that flow from its land. Instead, the agency bullied corporate agricultural interests, mining companies and other water users at the expense of the natural environment.

‘Death by 1,000 cuts’:How the US Forest Service is losing a water war in the West

“Even though it has this great history and identifies with the protection of natural resources, the agency has become captive to all of these interests that have permits and leases and contracts to operate on these lands,” John Horning, Director executive of WildEarth Guardians. , told the Arizona Republic last year. “It’s one thing to be open for business. It is quite another to serve only the companies that have the privilege of operating in our national forests.

Reporters found that the data provided by the Forest Service was far from perfect. It contained the names of companies and individuals who had permits to take water from forest land, but nothing about how much water they used. It also proved difficult to match permit holder data with separate water diversion data to answer the question of how much water each permit holder used.

To complicate matters, the US Forest Service has proven extremely difficult to work with. Agency officials have repeatedly refused or dodged interview requests from reporters and editors for nearly two years. Their silence was so prolonged that the team released an additional story simply to document the questions the agency left unanswered.

While it would have been helpful to receive assistance from the Forest Service, the lack of responses only proved that the agency has not been doing its job when it comes to monitoring the source of life of the water-hungry west.

In the end, it took more than 20 reporters, photographers, editors and designers from all four newspapers and USA TODAY to complete the series on how the US Forest Service failed at work and hampered efforts to fight back. against the declining health of our national forests. .

“Congratulations on being selected as a finalist for a Scripps Howard Prize! This honor is a testament to the quality and impact of your work,” said Mike Canan, director of journalism strategies at Scripps in a letter to The Republic.

Winners will be announced in an online broadcast June 12 on Newsy, the national news network owned by EW Scripps.