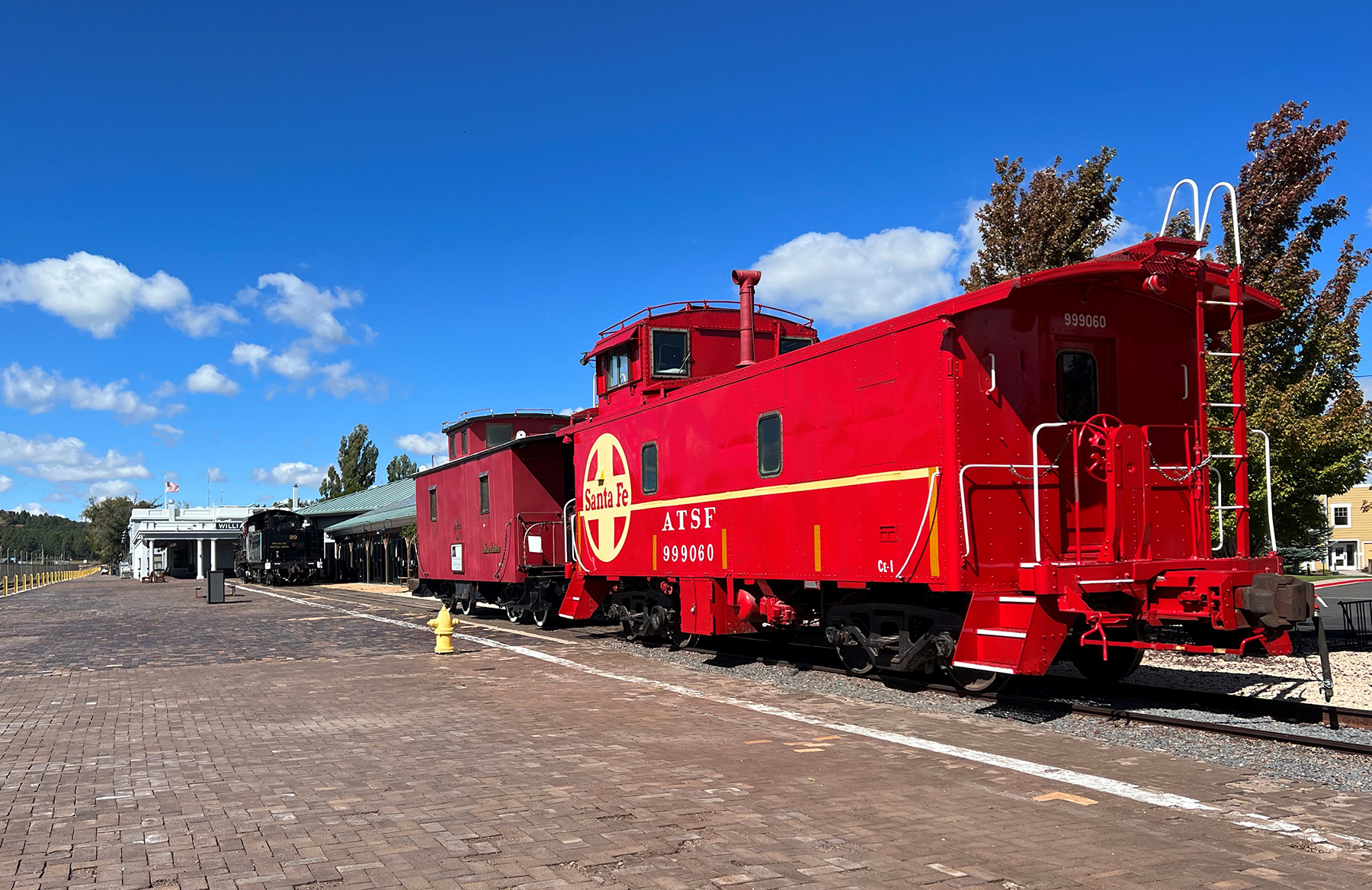 WILLIAMS, Ariz. – The Arizona State Railroad Museum Foundation and Center for Education announced the arrival of two vintage caboose cars that are now on display at the Grand Canyon Railway Depot.

“He served extensively in the Southwest with considerable service in Arizona until he was declared surplus and sold into private ownership in 1990 to Tom Wheeler in Kansas who gave him loving care,” said the ASMF director, Al Richmond.

Wheeler maintained the caboose in near mint condition and operated it in a tourist business on the Midland Railway in Baldwin City, Kansas from 1992 to 2019.

When the caboose went on sale, Richmond inquired about buying it.

With funds from a Transportation Improvement Grant and a donation from the Grand Canyon Chapter of the National Railroad Historical Society, the Arizona State Railroad Museum Foundation was able to purchase the caboose in 2020.

“We intended to move it as soon as it could pass inspection to move on its own wheels,” Richmond said. “Foundation volunteer Pete Kahon made trips to do the mechanical work.”

However, about the time it was ready to move, the caboose’s movement was blocked when hundreds of surplus ore cars were stored on the same track as the caboose.

it would be prudent if we decided to leave it in place rather than trucking it at great expense,” Richmond said. “As soon as the cars were moved in July, we started the single move (OTM) process with FRA and inspection with BNSF. Both were successful and we had lots of help from the various conductors to get here as quickly and safely as possible. »

In addition to the restored 1933 ATSF, another caboose is also on display at the Grand Canyon Railway.

“The OTM requirements placed it at the rear of the train, which was the normal operating position when the cabos were in service,” Richmond said. “The H-KCKBEL (the train identifier) ​​is BNSF regular freight from Kansas City to Belen, New Mexico. (It’s) really a rare sight to behold as caboose were no longer in service in the 1990s except in security yard service or other special services.

In addition to the two caboose cars, the museum also acquired four donated train cars and five sets of trucks (wheels) which were destined for scrap. They were stored on site at Kingman until the recent move to Williams on August 23. The train cars will serve as the entrance bridge to the Arizona Railroad Heritage Park property in Williams.

“The use of flatcars as bridges is common and such use of a flatcar body can be seen at NAU where it forms a pedestrian bridge. The trucks have historic value for use on other equipment as and as they are acquired,” Richmond said.

The Arizona State Railroad Museum Foundation is a nonprofit organization that primarily preserves Arizona State’s retired historic railroad equipment. It was founded in 2009, with the goal of building a 21-acre museum with a collection of locomotives, rolling stock, and other historical artifacts.

Completing the museum was a long process and acquiring artifacts from Arizona was a challenge.

“It has been and continues to be an ongoing process as we have planned exhibits relating to the history and heritage of 79 railroads in Arizona in accordance with our mission statement,” Richmond said. “We had difficulty acquiring material from Arizona.”

To date, the foundation has 50 major artifacts in Williams and other locations in Utah, Colorado, Kansas and Minnesota, he said.

“As with 999060, several artifacts are on public display at the Grand Canyon Railway with others on the storage tracks,” Richmond said. “In addition to these, we have several hundred smaller artifacts and thousands books, documents and photographs for our library and archives. We are also in discussions with members of the Williams City Council about where other major artifacts could be displayed in the city.”

The foundation is still working to secure ownership and funding for the Arizona Railroad Heritage Park.