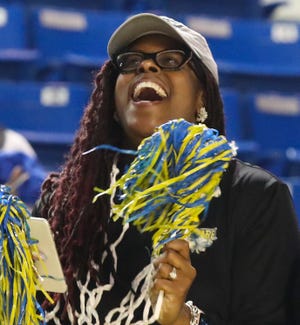 After leading Delaware to its first NCAA tournament appearance in nearly a decade this season, Natasha Adair was named the head coach of Arizona State women’s basketball on Sunday.

Adair will be the first black woman to lead the Sun Devils women’s basketball program. Adair is also the program’s first full-time black head coach; Joseph Anders was the interim head coach in 2011-12 when Charli Turner Thorne took time off.

“I am thrilled and honored to be named the new head coach of women’s basketball here at Arizona State University,” Adair said in a statement. “President Crow and our Vice President for Varsity Athletics, Ray Anderson, have effectively delivered an innovative, elite varsity and athletic program with a national brand; I am honored to be a part of this illustrious team.”

During his five seasons at Delaware, Adair led the program to three Colonial Athletic Association titles and posted consecutive 20-win seasons. Adair was named CAA Coach of the Year in 2021. Under Adair, Delaware averaged its highest points (65.8) since 2012-13.

Adair has over 20 years of coaching experience, including assistant coaching positions at Georgetown and Wake Forest.

Previously, she worked with USA Basketball as an assistant coach for the U18 Women’s National Basketball Team and the U19 Women’s World Cup Trial Court. Both teams won gold medals.

Adair is a founding member of Black Coaches United and has been recognized by Advancement of Blacks in Sports.

The post-retirement hire of Turner Thorne isn’t the first time Adair has replaced a longtime head coach. His predecessors in Delaware and Georgetown both held office for more than 20 years.