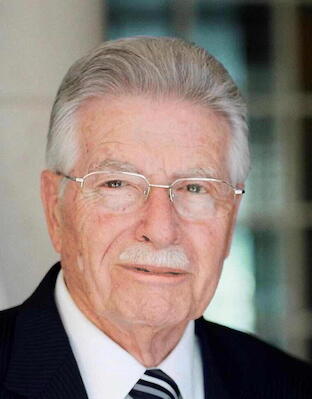 José Francisco Mendoza “Papa Joe” died on Saturday June 18, 2022. He was 92 years old. Born April 5, 1930 in Los Angeles, California, Joe was the son of immigrants and a first-generation American. At the age of 18, Joe enlisted in the United States Marine Corps where he achieved the rank of gunnery sergeant. He bravely served his country during the Korean War and won many medals. He remained a proud sailor all his life. On February 20, 1954, Joe married the love of his life, Marilyn Rose Nagle. They had two children, a son and a daughter, whom they raised in California and Arizona. They were married, until his death, for 68 years. After nine years in the Marines, Joe spent his adult life working for the Wrigley Company, working his way up to eventually become a regional manager. He was a favorite among his grandchildren and their friends for always having a box of chewing gum in his trunk. He retired from Wrigley in 1989, spending over 26 years with the company. When he retired, Joe loved working for his son’s real estate company, The Mendoza Team. Joe Mendoza is survived by his wife Marilyn, their children Michael Mendoza (Judith) and Stephanie Scott, their grandchildren Joshua Mendoza (Mary), McKenna Mendoza, Faye Quintana (Robert) and Hayley Scott, their two great-grandchildren , Abigail Mendoza and Anderson Mendoza, as well as numerous cousins, nieces and nephews. He was a light in their life. A really kind and caring man with a sweet demeanor and a smile for everyone. He will be greatly missed. Joe’s final resting place will be Riverside National Cemetery. A service honoring his life and military service will be held at 10:00 a.m., September 23, 2022, at St. Martha’s Catholic Church, 37200 Whitewood Road, Murrieta, CA.