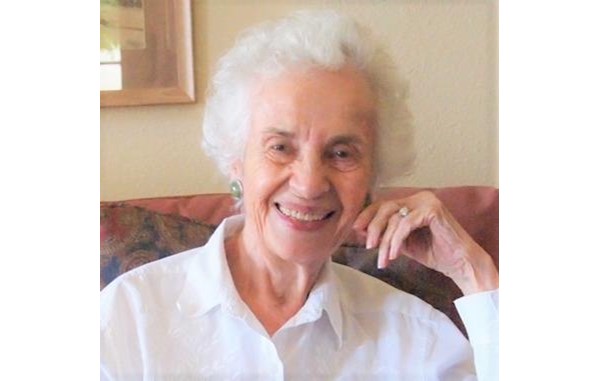 Phoenix – Janet Nichols Moore, 97, of Paradise Living Center in Phoenix, died Thursday, June 10, 2021. Janet Nichols was born October 16, 1923 in Salmon, Idaho to Edwina Yearian Nichols and Dewitt Lethbridge Nichols. She attended Salmon Elementary School and St. Paul’s School for Girls in Walla Walla, Washington. Her four years at St. Paul’s were extremely rich, meaningful and formative years for Janet. Janet and her brother, Ralph Nichols, were frequent weekend and summer visitors to the Yearian Ranch in Lemhi Valley, Idaho. Their grandfather, Thomas Yearian, was an early resident of the valley where he raised sheep and cattle. Their grandmother, Emma Yearian, Thomas’ partner in herding, was celebrated as the “Sheep Queen of Idaho.” In 1941 Janet was accepted into the School of Music at Montana State University (now the University of Montana) in Missoula. She studied with John Lester, was a member of the chosen singing group The Jubileers and appeared in numerous concerts and operas. She was a member of Kappa Kappa Gamma sorority. While at college, Janet met Jack M. Brazelton; they married in January 1943 shortly before Jack Brazelton was sent overseas. He was killed at Anzio Beach in February 1944. In 1946 Janet married Herbert Jillson, a returning veteran and former music school classmate. This marriage ended in divorce and in 1952 Janet married James Selway of Dillon, Montana. While living in Dillon, Janet earned a master’s degree in education from Western Montana College and began teaching English at Beaverhead County High School. She also continued to sing and perform at frequent gigs at Western Montana College. In 1965 Janet moved to Phoenix, Arizona where she taught English and social studies at Alhambra High School until her retirement. Janet loved teaching and was tireless in finding ways to help her students learn and grow. Janet married Daniel Moore of Phoenix in 1974; the couple had been together for nearly thirty-seven years. They were excellent companions, devoted to each other and to their common interests of arts, philosophy, spiritual exploration and service to others. They enjoyed many years of travel and study which further enriched Janet’s teaching, especially her teaching of the humanities. Dan preceded Janet in death in 2010. Janet was a member of Trinity Episcopal Cathedral in Phoenix where she sang for many years in the choir and served in the altar guild. Janet is survived by her sons Jack Brazelton Selway of Colorado and James Jillson Selway of Virginia; his grandsons, DeWitt Selway, Richard Selway, Lewis Selway, Daniel Selway and John Selway; his nieces Mary Ed Berry, Dr. Rachel Nichols, Dr. Sara Nichols; her stepchildren, Daniel Moore, Maggie Callaway and Jane Callahan-Moore. Donations in Janet’s memory may be made to Trinity Cathedral, 100 West Roosevelt Street, Phoenix, Arizona 85003. A memorial service and celebration of her life will be held Saturday, July 24, 2021 beginning at 10:00 a.m. at Trinity Episcopal Cathedral 100 W Roosevelt St, Phoenix, AZ. Interment will follow at Greenwood Memory Lawn Cemetery 2300 W. Van Buren St Phoenix, AZ. Arrangements under the direction of the AL Moore-Grimshaw Mortuary. Please visit www.ALMoore-Grimshaw.com to leave memories and tributes.