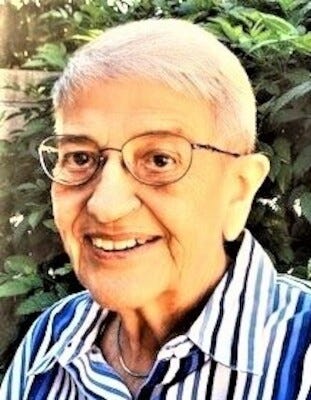 Gloria Pogson Olsen of Phoenix died September 12, 2022. She was born in El Paso, Texas in 1942, the daughter of Percy W. Pogson, Jr., and Catherine Hawbaker Pogson. A straight A student, Gloria was educated in public schools in El Paso until her family moved to Phoenix in 1958. Gloria graduated from North Phoenix High School. She attended Stanford University, where she earned a BS in psychology. Gloria obtained a master’s degree and a doctorate. from Northwestern University. After graduating, she returned to Phoenix, where she practiced as a psychologist for several years. Gloria earned an MBA from Arizona State University and became director of the behavioral health division at St. Luke’s Hospital. Gloria moved to Kerrville, Texas in 1993, where she became superintendent of a Texas state hospital. While in Kerrville, she was active in religious and cultural organizations. Gloria retired in 2015 and moved back to Phoenix. She became and remained an officer of the Orangewood Presbyterian Church. Gloria is survived by her brother, Stephen W. Pogson, and her sister-in-law, Linda Pogson of Phoenix; a nephew, Clyde H. Pogson of Havelock, North Carolina; one niece, Catherine A. Pogson of Phoenix; and many cousins. Services will be held at Orangewood Presbyterian Church, 7321 N. 10th Street, Phoenix, AZ on Friday, October 14, 2022 at 10:00 a.m. Contributions may be made to The Nature Conservancy, 1819 E. Morten Ave., Suite 100, Phoenix, AZ 85020.