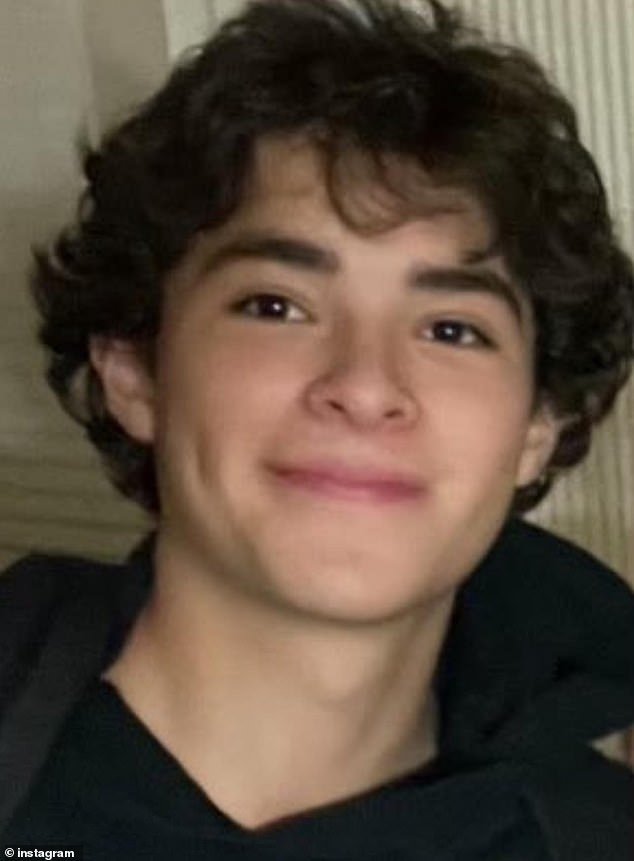 A freshman at Arizona State University plummeted 20 feet to his death during spring break in Mexico when he scaled a short wall that had a dramatic drop on the other side.

The area where Nevarez fell is described by his friends as a short pony wall. Palm trees resembling small bushes covered the other side of the wall, obscuring the 20-foot drop.

“It almost looks like it’s just a shrub or bush and the little wall there is about knee-high,” Aiden’s friend told KTVK/KPHO, Jake Reithinger, 19, who was with him in Cabo.

But the greenery was not shrubs, but rather the tops of palm trees and the freshman fell 20 feet from the ground below. It’s unclear how Nevarez ended up getting over the wall or why he was trying to scale it. 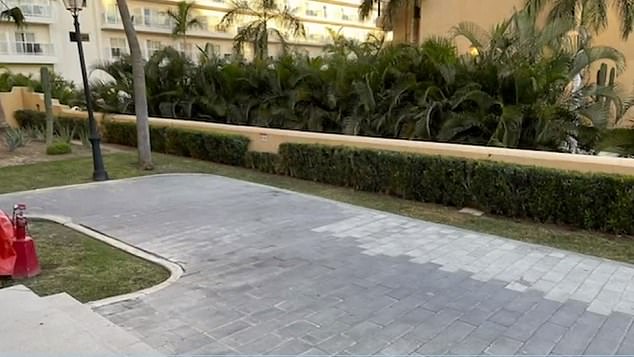 The area where Nevarez fell is described by his friends as a short pony wall. Palm trees resembling small bushes covered the far side of the wall, obscuring the 20ft drop

But his death was ruled accidental, according to his death certificate. The certificate does not indicate whether he had drugs or alcohol in his system.

His heartbroken parents told the Arizona Republic they believe changes, like better signage or a raised wall, need to be made in light of their son’s sudden accidental death.

“It can’t happen to anyone else – it’s completely insane,” said Sayra Nevarez, her mother.

Nevarez was a former Pinnacle High School wrestler who graduated in 2021 and was currently a freshman at ASU studying business.

His friends describe him as someone who lit up every room he walked into, always with a positive attitude and a smile.

His friend Jack Fitzgerald, 19, who was also with him in Cabo, told The Arizona Republic they landed around noon Sunday and spent the day hanging out at the beach and exploring the area.

They were at a restaurant around midnight, he told The Republic, when “out of nowhere” Nevarez put his arm around him and told him he loved him, which he did. rendered.

“It was such a special moment,” Fitzgerald said. 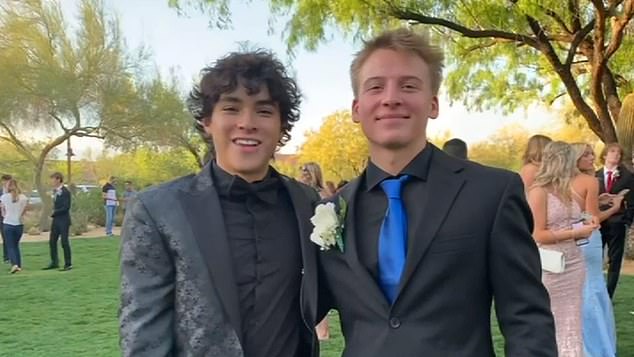 The group of friends were dropped off by their taxi driver around 2am. Just hours later, Fitzgerald said he received a text message that his best friend was gone.

“I fell to my knees in my bedroom and I just couldn’t believe it,” Fitzgerald said. “It was the worst time of my life, and it still is.”

His parents, Sayra and Matias Nevarez, said they were notified by phone call from the consulate a few hours after the tragedy.

“You can’t breathe, you can’t process anything, you feel like nothing is real,” Sayra Nevarez said in an interview with The Arizona Republic on Saturday. “Everything stops – your life ends there.” 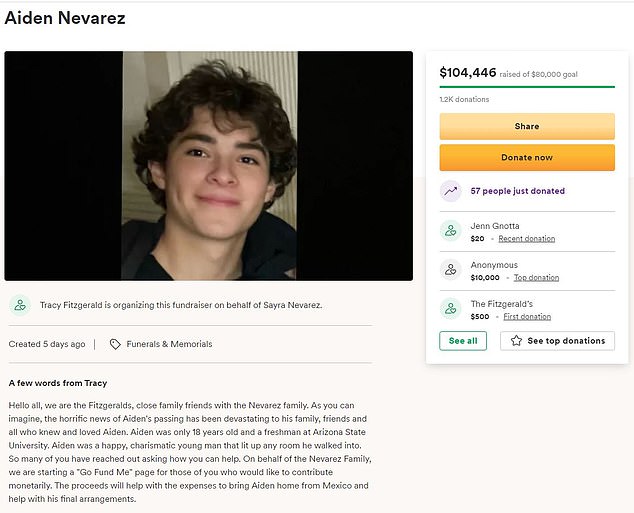 They said their son had big plans for his life and a “very, very bright future”, adding that he majored in financial planning and was particularly interested in helping young people understand finance.

“We love him so much and will miss him until we see him again,” she said. “I know wherever he is right now, he’s going to win because that’s what Aiden was.”

His mum said it was ‘so heartwarming’ to see how much her son had touched the lives of others, adding that he was and remains a ‘shining and shining light’.

The proceeds will help defray the cost of repatriating her body from Mexico and help her make her final preparations.

Spring Break travel is already in full swing for many, and Florida and Fort Lauderdale are gearing up to “triple” visitor numbers from last year as tens of thousands of college students prepare to celebrate the first Spring Break in the United States without COVID rules.

Residents of popular vacation spots, including Cancun, Miami, Pensacola, Fort Lauderdale and South Padre Island, have to deal with endless crowds of students having fun, often playing loud music and drinking alcohol from the first week of March until April. 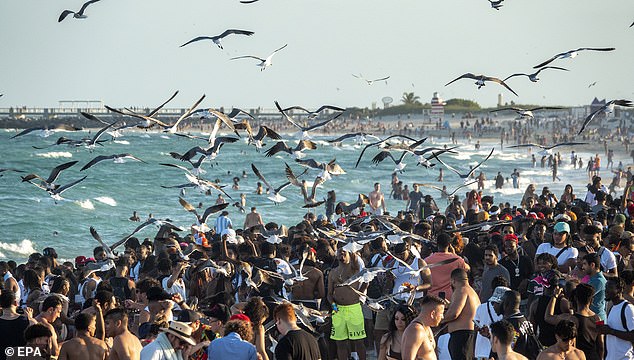 Many popular spring vacation spots expect to at least double or triple the number of spring breakers flying this year between March and April, as resorts, nightclubs and other businesses eagerly wait to recover some lost time over the past two years due to the Coronavirus pandemic. Pictured: A crowded beach in Miami on Friday. None of the people pictured were involved in the drug incident 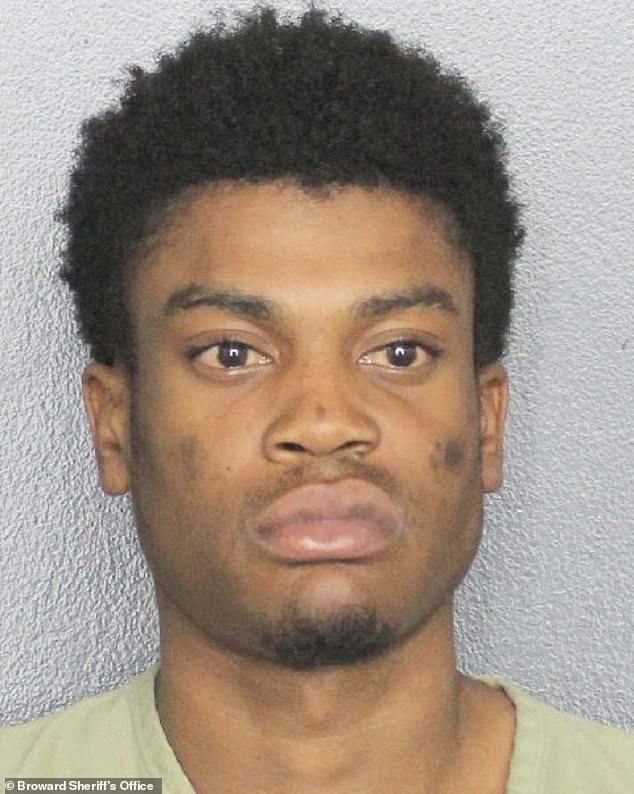 A suspect believed to be linked to a group of spring breakers who overdosed on cocaine laced with fentanyl, has been named Axel Giovany Casseus, 21

Last week, six West Point cadets were hospitalized after an overdose of cocaine laced with fentanyl.

Axel Giovany Casseus, 21, of Lauderhill, near Fort Lauderdale, was arrested Friday night in Wilton Manors, Fla., for allegedly selling cocaine to an undercover officer. It is thought to be linked to overdoses.

He was charged with one count of trafficking cocaine under 200 grams and is being held at Broward Main Jail, with bail set at $50,000, according to The Sun-Sentinel.

Authorities allege Casseus sold 43 grams of cocaine on Friday to an undercover detective, who followed him to a hotel, according to WPLG.

A seventh person, identified only as a woman, was later taken to hospital and treated as well, the Sun-Sentinel reported.

It is not known if she suffered an overdose or what condition she is in. It is also not known whether she traveled to West Point with the other patients.

DailyMail.com has contacted the US Army Academy at West Point and has been told by a representative that the prestigious military college is “aware” of the incident in Florida involving its students.

“The United States Military Academy is aware of the situation involving West Point cadets, which occurred Thursday night at Wilton Manors, Florida,” a West Point spokesperson said in an email. “The incident is currently under investigation and no further details are available at this time.”