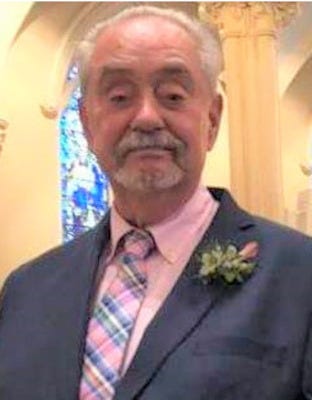 Scottsdale – Frederick W. Sergeant III, 79, of Scottsdale, AZ, was reunited with his wife Greta and our Heavenly Father on November 22, 2021. Frederick passed away peacefully at home with loved ones and caregivers by his side. Fred was born on January 6, 1942 to Hilda Hosking and Frederick W. Sergeant II, in Claremont, NH. Fred attended Greenfield High School and continued his education at UMass Amherst before joining the United States Navy. Frederick was a communications officer who served in the Vietnam War and was deployed aboard the aircraft carrier USS Independence during the Cuban Missile Crisis. Fred married his first wife, Barbara, in 1974 and together they raised their two children in Hartford, CT. Frederick was a member of the Knights of Columbus and enjoyed getting involved in municipal politics. Fred returned to his faith and joined Asylum Hill Congregational Church where he not only married Margarethe “Greta” Hopkins in 1998 but also served as a choir member and later became a minister. Fred was extremely passionate about sharing his love of cooking with everyone. His talents and cooking skills shone throughout his career as a chef and restaurant business owner. In 2017, Fred and Greta moved to Scottsdale, AZ to enjoy their retirement at the base of the Camelback Mountains. Besides Greta, Fred is predeceased by his parents and his sister, Cheryl Wright. Frederick is survived by his sisters, Patricia Carme of Greenfield MA and Maureen Lewis of Erving MA, son Christian Sergeant of Scottsdale AZ, daughter Colleen Miller of Bristol CT, son-in-law Philip Hopkins and wife Betsy of West Hartford CT, daughter-in-law Virginia Hopkins and her husband Matthew Cullina of Providence RI. Also left behind are the true blessings of her life, her grandchildren, Sergeant Connor, Michael Miller, Sergeant Zoe, Elise Gallegos and her husband Connor, Abby Hopkins, Ciara Cullina, Alexis Cullina and Emilia Cullina, as well as her many nieces and nephews. A memorial service will be held at Asylum Hill Congregational Church, Hartford, CT on Wednesday, December 29, 2021 at 1:00 p.m. EST. A live streaming option will also be available via www.ahcc.org