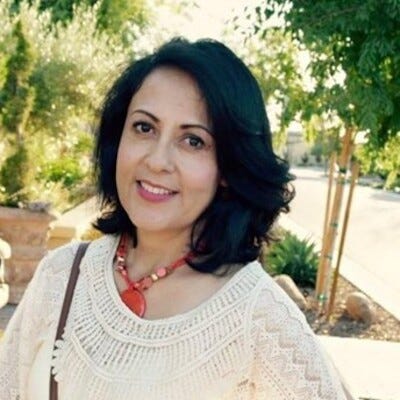 Esther Avila Switzer died on October 4, 2022, following a long and fierce battle with cancer. Esther was 56 years old. She is survived by her husband Scott, her sons Alberto Alcerreca Avila and Luis Javier Lopez Avila; his parents Albino Avila and Maria Luisa Rodriguez; sisters Gloria, Marisol and brothers Gerardo, Albino and Jose Guadalupe and numerous nieces, nephews and extended Switzer family in Michigan. The Avila family lived in Ensenada and Esther graduated from high school and then attended Universidad Autonoma de Baja California (UABC), earning a Bachelor of Science degree in accounting. Esther’s passion for accounting led to a successful career as a forensic auditor for the Baja California Norte State Attorney General’s Office, as well as Senior Accountant for Papas & Beer Entertainment Group in Ensenada. At a Christmas party in 2013, Esther met her future husband, Scott Switzer. Esther and Scott were married on Valentine’s Day 2015. Esther loved dancing, music, and travel. As a testimony to the “family”, Esther received visits from many members of her family before her death. The family traveled from Mexico City, Aguascalientes, Monterrey, Ensenada, Mexico City and Carlsbad, and Seattle. Esther started working at the City of Phoenix as an accountant in 2018. She loved her co-workers. A special thank you from the Switzer and Avila families to Sandra, Elsy and her accounting teammates who stayed close to her during her battle with cancer. A special thank you to the Winburne & Switzer families and all of our extended friends for the love and support given to Scott and the boys. Esther was always full of joy as she encouraged others to follow their dreams. She was indeed loved by her friends and all her family. Mass services for Esther will be held in Ensenada, Baja California on October 22 at the Parroquia del Purisimo Corazon de Maria at 2:00 p.m. A “celebration of life” will be held in Glendale, Arizona at a later date. To be included in the contact list, please email Scott Switzer at [email protected] Donations can be made in Esther’s name to Hospice of the Valley Thunderbird PCU, 1510 Flower St., Phoenix, AZ 85014