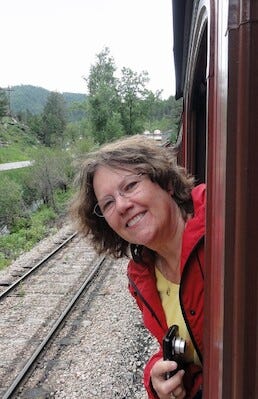 Carolyn (Cari) McElhaney, a resident of Shadow Mountain Memory Care, succumbed to the debilitating effects of Lewy body dementia on July 1, 2022, at the age of 76. Cari was born and raised in the Detroit area, graduating from McKenzie High School. She earned an elementary education degree from the University of Michigan in 1968 and began her teaching career in Lincoln Park. She married Ronald McElhaney in 1969. Ron entered active duty as a US Army officer in 1971. Cari enjoyed the role of an officer’s wife and was active in the communities where she was assigned. While at White Sands Missile Range, she served as a Girl Scout troop leader—before having children of her own. After Ron separated from the military, the couple returned to the Detroit area before moving to Arizona in 1978. Cari took time off from teaching to care for her young children, then returned to teaching in the Paradise Valley Unified School District where she taught for more than 20 years. years, mainly as a fourth-grade teacher. She received her Masters in Education from Northern Arizona University. Cari loved visiting national parks and had many camping adventures with her family, including camping with Ron on the Outer Banks of North Carolina while on their honeymoon. More recently, she has enjoyed family trips to Hawaii, Canada and Europe. Cari was strong-willed, but she had a gentle personality and a positive approach that allowed her to prevail in difficult situations. She was an avid reader and avid learner, impacting countless people as a teacher, Cub den mother, Girl Scout troop leader and Sunday School teacher. Cari was an active member of the Presbyterian Women of Valley Presbyterian Church, and she demonstrated her faith by consistently treating all people with kindness and respect. Family was most important in Carl’s life. She was a devoted daughter, an involved mother and a grandmother who rejoiced in her grandchildren, caring for them when their parents were at work. She enjoyed spending time with Ron in all kinds of activities – enjoying the outdoors, attending sporting and cultural events, and volunteering as a marching band host for the Fiesta Bowl. Cari was predeceased by her parents Malcolm and Mary Etta, and her brother Malcolm. She is survived by her husband Ron, her son Tom, her daughter Laurie Herrmann (Knut), her grandchildren Kai and Zoe and her nephew David Smith. A celebration of life will be held at Valley Presbyterian Church.

2022-07-17
Previous Post: Arizona State Athletics Hall of Fame inductees react after being honored
Next Post: Can Arizona State football compete in the Pac-12 in 2022?