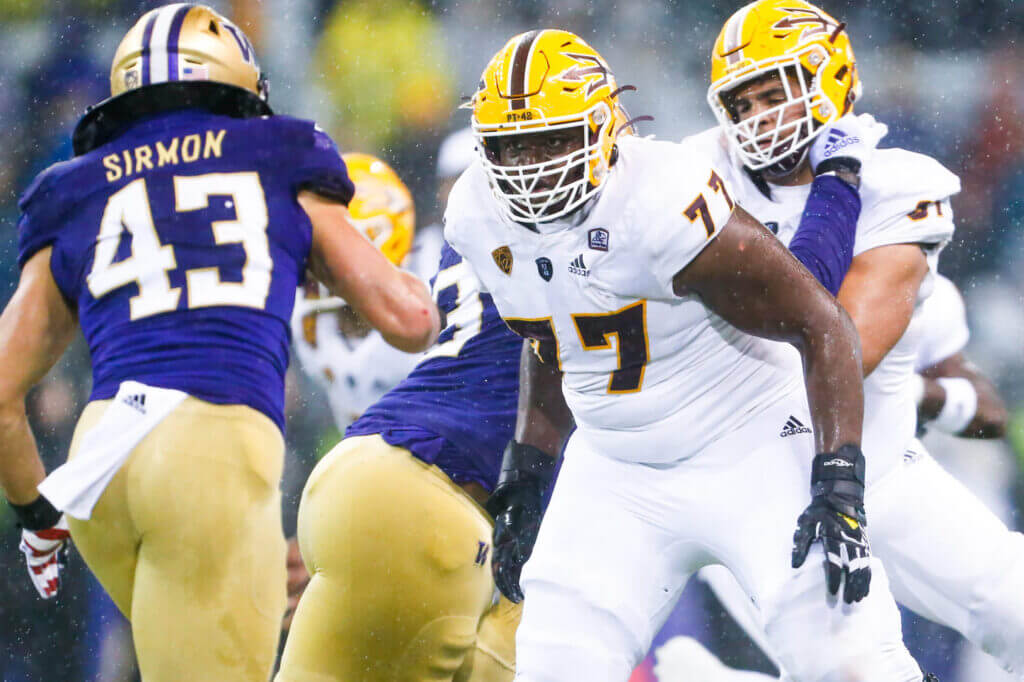 TEMPE — One of the best stories to come out of the Arizona State media room last season came from Robert Rodriguez. Asked about linebacker Darien Butler, the defensive line coach talked about Arizona State’s preseason ritual of ranking the best players in the program. Before last season, Rodriguez said he was so attached to Butler that he almost stood up on the table to plead his case. “20! he shouted, referring to the linebacker’s jersey number.

Today, Athleticism undertakes a similar exercise, ranking Arizona State’s top 25 offensive players. It was not an easy task. Coach Herm Edwards enters his fifth season with uncertainties on this side. Twelve of the 25 on that list weren’t even on last season’s roster. Two of the top four weren’t even there for spring training! Aside from guard LaDarius Henderson, an obvious All-Pac-12 candidate is hard to find.

It is important to note that Arizona State is not finished. The Sun Devils should add junior college transfers to help at receiver and in the trenches. Until then, let’s get started.

1. Emory Jones, senior, quarterback. I have to start here, don’t I? Jones had mixed results in Florida last season, but he’s a great athlete and solid leader, qualities that should help spark an Arizona State offense that has lost multiple playmakers.

2. LaDarius Henderson, senior guard. Henderson has come a long way since starting out at Michigan State as a 17-year-old rookie. He’s become a dependable lineman on the left side and a strong voice in the locker room.

3. Xazavian Valladay, grad student, running back. A solid racing game was a staple of Edwards’ time in Tempe. That should bode well for Valladay, who had 3,274 yards in four seasons at Wyoming.

4. Cam Johnson, junior, receiver. Arizona State suffered massive losses at receiver, with Ricky Pearsall (Florida), LV Bunkley-Shelton (Oklahoma) and Johnny Wilson (Florida State) all traded. Transferring from Vanderbilt, Johnson had three productive seasons in the SEC, catching 124 passes for 1,233 yards. He must be a factor in the slot machine.

5. Ben Scott, junior, offensive line. Scott started the last two seasons at right tackle but trained at center in the spring. He could go back outside in the fall. For a team replacing three holders on the line, its versatility is a strength.

6. Elijhah Badger, sophomore, receiver. If you knew nothing about Arizona State and watched practice, Badger would be among the first players you would notice. He is sporty. He is strong. He is fast. He just looks like a point guard. Arizona State needs him to play like one.

7. Case Hatch, senior, back. It simply boils down to this: good things happen when Hatch is in the field.

8. Emmit Bohle, senior, tackle. From high school football nines to Northern State, Bohle took an unusual path to the Pac-12. But make no mistake. The 6-7 lineman has impressed since joining and could start at left tackle.

9. Daniyel Ngata, second year running back. Since arriving as a four-star prospect in high school, the sneaky Ngata has played a back-up role to Rachaad White. This season, he’s in line for a bigger role, but one question remains: is Ngata a solid change of pace or can he carry the load?

10. Messiah Swinson, senior, tight end. Arizona State loved 6-8 tight end Curtis Hodges so much that they went out and got someone very similar. A transfer from Missouri, the 6-7 Swinson is 15 pounds heavier than Hodges, but he moves well and should be a factor in passing and running plays.

11. Paul Tyson, junior, quarterback. A problem from last season: No one pushed Jayden Daniels. No matter how badly he played, he didn’t come out. He knew it. Everyone knew it. This must change. Tyson has to challenge Jones all summer and all fall.

12. Des Holmes, graduate student, tackle. The Sun Devils had success with Kellen Diesch, a Texas A&M reserve who transferred to Arizona State and became a starter for two years. A reservist at Penn State, Holmes hopes to follow a similar path.

13. Isaia Glass, second year, tackle. Glass lined up at first-team left tackle for most of the spring. It will be his place. Maybe not this season.

14. Tevin White, freshman, running back. A four-star prospect in high school, White will likely find himself stuck behind Valladay and Ngata come fall. It is very good. At 6-1, 190, the Whites have an impressive size. He can also catch the ball out of the backfield. Time is on his side.

15. Chris Martinez, graduate student, guard. Martinez could be one of three transfers, joining Bohle and Holmes, to start on the offensive line at Arizona State. He started last season at San Diego State and rotated to right guard for the first team in the spring.

16. Bryan Thompson, grad student, catcher. A transfer from Utah, Thompson was expected to make an impact as a deep threat last season. It never happened. He battled early injuries and finished with 13 catches for 130 yards. This season, he gets one last chance.

17. Jalin Conyers, sophomore, tight end. After being traded from Oklahoma, Conyers showed flashes last season. Arizona State’s tight end room can be the best in the unit if he becomes a consistent contributor.

18. Joey Ramos, senior, offensive line. A native of Phoenix, Ramos transferred to Arizona State in April after spending the previous four years at Iowa State. He has experience starting at right tackle and has practiced in the middle. His versatility and experience give coach Mike Cavanaugh options.

19. Tight Butt Freshman Jacob Newell. Oregon’s three-star prospect, Newell was ranked 59th in his position according to the 247Sports Composite. Even so, many inside the football facility believe the Sun Devils had a robbery. At 6-5 and 220 pounds, Newell has a solid size. An outstanding basketball player, he also has great athletic ability for his position.

21. Ben Bray, second year, guard. Since arriving two years ago, Bray has been waiting for his turn. He was kicked out of spring training due to a health issue, but Arizona State loves his potential. The sooner he can enter the field, the better.

22. Daylin McLemore, second year, quarterback. McLemore may have been Arizona State’s most improved player this spring. While that may not be enough to push Jones or Tyson, he can position himself for that possibility in the coming seasons.

24. Chad Johnson Jr., sophomore, catcher. Another guy who hasn’t had a chance to show what he can do, mainly because of injuries. Johnson made some attention-grabbing plays in practice. It’s time for him to step into the field.

25. Austin Barry, sophomore, tackle. Although he doesn’t see a lot of action, this is an important year for Barry. He needs to be ready in case a starter gets injured (always a strong possibility) and show the coaches he’s ready to fight for a starting position next season.

2022-06-24
Previous Post: Dates, prices, how to get discounted tickets
Next Post: The last time Arizona State played in the Rose Bowl…