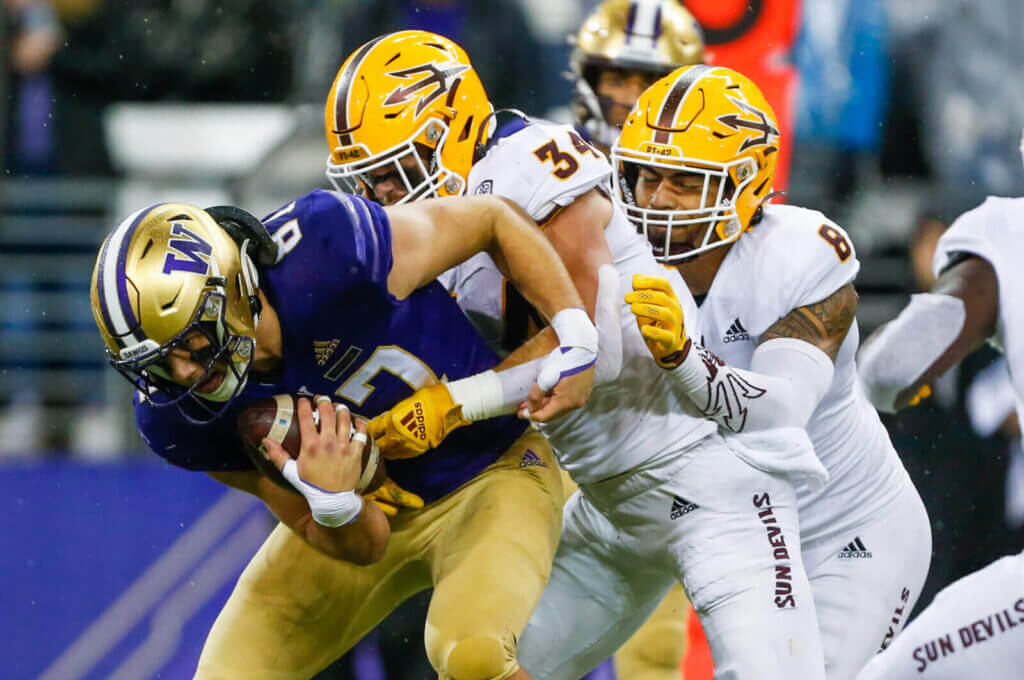 TEMPE, Ariz. — With so much change and uncertainty on offense, Arizona State might need its defense to hold things together to start the season. The Sun Devils might have the staff to do it.

A pair of fifth-year linebackers lead a unit that last season gave up 20.8 points per game, the fewest for the program since 1997. The secondary is a concern, but the line is in decent shape. Even with the transfer losses of defensive tackle Jermayne Lole (Louisville) and linebacker Eric Gentry (USC), ranking the top 25 players in the unit isn’t as difficult as scoring the offense.

1. Kyle Soelle, fifth-year linebacker. Team captain and top tackler last season, Soelle has become a face of the program. Throughout the uncertainty of the NCAA investigation and everything else, his leadership has remained strong. It is his defence.

2. Merlin Robertson, fifth-year linebacker. There was a buzz around Robertson during the Spring Ball. Think about it. As a four-year-old starter, he’s seen a lot, done a lot. Some vets may have rubbed shoulders with it. Robertson did the opposite.

3. Nesta Jade Silvera, graduate student, defensive tackle. With Lole in Louisville and DJ Davidson in the NFL, Arizona State lost some power up front. A move to Miami, Silvera helps fill that void. He is fast and explosive. At least one teammate thought he was Miami’s best defensive player last season. Silvera sat out of Spring Ball due to injury, but he impressed coaches and teammates with his commitment and maturity.

4. Khoury Bethley, Graduate Student, Security. As you may have heard, Arizona State needs to replace their entire high school first team. In such cases, adding a transfer like Bethley, who was a three-year starter and All-Mountain West selection in Hawaii, is about as good as it gets.

5. Jordan Clark, junior, defensive back. Clark brings value with his versatility. It can contribute nickel or security. No matter where he plays, he’s one of Arizona State’s top 11. He is also a trusted voice within the program.

7. Omarr Norman-Lott, sophomore, defensive tackle. In April, Norman-Lott entered the transfer portal. In a pleasant surprise, he decided to return. He’s been in a substitute role for most of his career, but his drive and potential has always been evident. With Lole gone, it’s his time.

8. Timarcus Davis, fifth year, cornerback. Along with Chase Lucas and Jack Jones in the NFL, Davis is Arizona State’s most experienced corner. It’s a good starting point, but he has to work on consistency. Against Wisconsin in the Las Vegas Bowl last season, Davis had a team-best nine tackles and one interception.

9. Anthonie Cooper, junior, defensive end. Cooper is perhaps the most underrated player on Arizona State’s roster. Last season, he improved as the season progressed, finishing with 3.5 sacks and 5 tackles for loss. His 415 snaps ranked behind Matus among defensive linemen.

10. BJ Green II, sophomore, defensive tackle. As a freshman, Green last season rotated on third down and produced a team-best five sacks. It was enough to earn him a scholarship. Green missed the spring due to injury, but his next step should be interesting.

11. Isaiah Johnson, Red Shirt Freshman, Cornerback. Johnson is among the highest-rated high school prospects Arizona State has signed under Edwards. He only played three games last season, but a good spring showed he could be ready.

12. Kejuan Markham, Senior Security. Despite the high school losses, Markham’s experience gave the Sun Devils some stability. He has a good size. He is physical and he is comfortable in the cover. He will be in the mix for a starting position.

13. Connor Soelle, junior, linebacker. Gentry’s transfer opens up a place in the first team. Connor isn’t as tall as his older brother Kyle, but he could be a better athlete. He signed with the program as a safety but has adapted well at linebacker. Expect a bigger role.

14. Tautala Pesefea, senior, defensive tackle. Pesefea has come a long way since arriving as a junior college transfer in 2019. His role has grown with each season, and with Davidson gone to the NFL, he has a chance to contribute even more.

15. Chris Edmonds, Senior Security. A transfer from Samford, Edmonds has strong credentials. He was an FCS All-America. At 6-foot-2 and 214 pounds, he’s got a nice build. He got first-team reps in late spring and could open preseason camp as a projected starter.

16. Joe Moore, second year, defensive end. If you’re looking for a breakout candidate, Moore is a decent choice. Although he can’t explode from the edge, he can beat his man with power. He was one of the most improved players of the spring.

17. Travez Moore, graduate student, defensive end. A 2020 LSU transfer, Moore last season tore his ACL in his third game and was lost for the season. His explosiveness up front was missed. If 100%, Moore should be a factor in the pass rush.

18. Gharin Stansbury, sophomore, defensive end. Positional coach Robert Rodriguez touted Stansbury’s potential for some time. At 6-5 and 220, he has great size and the right mentality. Look for him to be on the pitch more this season.

19. Keon Markham, junior, cornerback. Markham worked on corner and safety, but corner seems like the best choice. Wouldn’t it be something if Arizona State had two sets of first-team brothers — the Soelles and the Markhams?

20. Will Shaffer, sophomore, linebacker. Shaffer has established himself as a quality contributor for special teams. With Gentry gone, he has a chance to make his mark on defense. At a minimum, he will be a quality replacement.

21. Robby Harrison, freshman, nose tackle. A three-star South Carolina prospect, Harrison’s size was a springtime scenario. Some newcomers arrive looking for the part; few arrive resembling the 6-foot-3, 285-pound Harrison. He’s raw and could take some time to develop, but like Stansbury, he’s someone to watch.

22. Tarik Luckett and Ro Torrence, juniors, cornerbacks. Luckett and Torrence weren’t there for the Spring Ball, so it’s hard to gauge where they stand. Luckett began his college career in Colorado, where he played catcher before moving to defense. He started twice as a true freshman in 2019, finishing with eight tackles and two pass breakups. After missing the 2020 season due to injury, he transferred to Cisco Community College in Texas. Torrence played last season at Auburn, contributing as a reserve. Prior to his SEC stint, he was the NJCAA Defensive Player of the Year at Hutchinson Community College.

23. Macen Williams, second year, cornerback. It is difficult to predict the depth chart at the corner. Williams, along with sophomores Ed Woods and RJ Regan, could all fight for rotation spots. Williams, however, might have an advantage. Last season he contributed in nickel situations. He also got first-team reps in the spring.

24. Willie Harts, junior, security. Harts is best known for offering the sixth sealing pick in the 2019 Sun Bowl. Since then, however, he has struggled with injuries. With the Sun Devils rebuilding in the secondary, this is his chance.

25. Jaydon Williams, redshirt freshman, linebacker. Williams hasn’t had much luck with injuries. He’s undersized, but his speed and athletic ability might be enough to get him onto the pitch.