Arizona State Retirement System reduced its position in shares of Donaldson Company, Inc. (NYSE: DCI – Get Rating) by 1.2% in the 1st quarter, according to the company in its latest Form 13F filed with the Securities & Exchange Commission. The company held 33,410 shares of the industrial products company after selling 391 shares during the quarter. The Arizona State Retirement System’s holdings in Donaldson were worth $1,735,000 at the end of the most recent reporting period.

Donaldson (NYSE:DCI – Get Rating) last released quarterly earnings data on Wednesday, June 1. The industrial products company reported earnings per share of $0.67 for the quarter, missing analyst consensus estimates of $0.72 per ($0.05). Donaldson had a net margin of 9.91% and a return on equity of 28.15%. The company posted revenue of $853.20 million in the quarter, versus a consensus estimate of $823.99 million. During the same period last year, the company posted earnings per share of $0.66. The company’s quarterly revenue increased 11.5% year over year. On average, stock research analysts expect Donaldson Company, Inc. to post earnings per share of 2.69 for the current fiscal year.

Separately, director Willard D. Oberton sold 7,200 shares of the company in a transaction dated Thursday, June 2. The shares were sold at an average price of $53.09, for a total transaction of $382,248.00. As a result of the transaction, the administrator now directly owns 23,903 shares of the company, valued at $1,269,010.27. The transaction was disclosed in a legal filing with the Securities & Exchange Commission, accessible via the SEC’s website. 2.52% of the shares are held by insiders.

Want to see which other hedge funds hold DCI? Visit HoldingsChannel.com to get the latest 13F filings and insider trading for Donaldson Company, Inc. (NYSE:DCI – Get Rating). 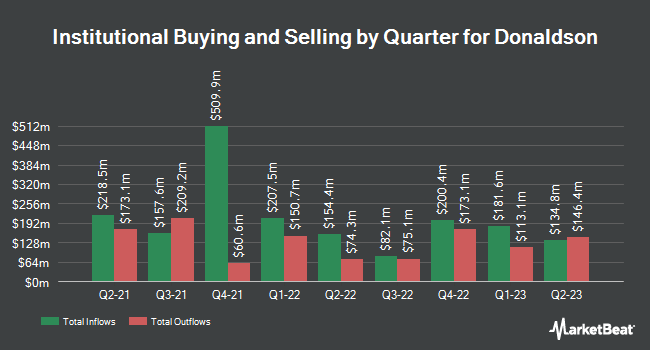 Get news and reviews for Donaldson Daily – Enter your email address below to receive a concise daily summary of the latest news and analyst ratings for Donaldson and related companies with MarketBeat.com’s FREE daily email newsletter.