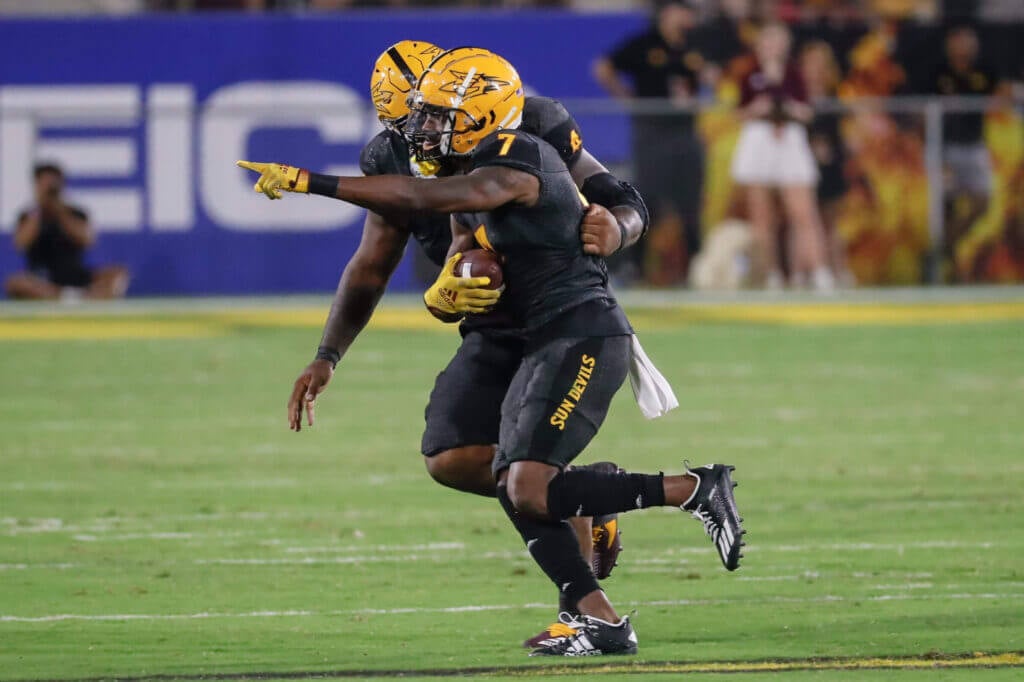 TEMPE, Ariz. — Arizona State fired Herm Edwards six weeks ago, giving itself a head start in a coaching search that will reshape its future.

The Sun Devils are one of eight FBS programs seeking a head coach. Auburn joined the squad on Monday, firing coach Bryan Harsin. The others: Charlotte, Colorado, Georgia Tech, Nebraska, UAB and Wisconsin. This list will grow in the coming weeks.

In the meantime, questions have arisen. Has popular interim coach Shaun Aguano done enough to keep the job at Arizona State? Is Oregon offensive coordinator Kenny Dillingham the best option? And Deion Sanders?

1. Before hiring a coach, the State of Arizona must examine itself. This program has long suffered from an identity crisis, caught between what it wants to be and what it is. It’s nice to think you’re above the lower level bowls, but to feel that way, you have to actually win those bowls. Too often the Sun Devils haven’t. Since 2000, they are 5-10 in bowl games. Know who you are. Build from there.

2. The obstacles to this research are real. Arizona State is under investigation by the NCAA for alleged recruiting violations. The Pac-12 is on shaky ground. And despite a recent public statement of support from school president Michael Crow, Ray Anderson’s job security as vice president of athletics is shaky. Candidates with options can fire the Sun Devils for these reasons. An abundance of unknown variables does not create a great work environment.

3. That doesn’t mean Arizona State can’t get a good coach. You can get players here. Even though the NCAA survey devastated recruiting, Arizona State is a household name in Southern California. State talent just keeps getting better. The campus is a plus. The facilities are solid. It may not be the “sleeping giant” everyone thinks it is, but it’s still an attractive job.

4. The Sun Angel Collective, a booster-led initiative that helps players with NIL opportunities, could play an important role. From its launch in August, collective leaders knew Edwards’ time at Arizona State was short. The group has had months to put resources in place for a new coach.

5. The strangest development to date in this research occurred on October 13 when Kari Lake, the Republican gubernatorial candidate of Arizona, tweeted her support for Urban Meyer as the next coach of Arizona State: “Let’s instill a winning tradition and make it more than just football, let’s make this the start of a legacy.” I have no idea what that means.

ASU Fan Poll: Given his successes (and other things), do you think Arizona State should pursue Urban Meyer as their next football coach?

6. Is it common for politicians to openly support a candidate coach? Not really. While they may voice their opinions behind the scenes, they rarely come out and endorse a candidate like this. In 1977, after LSU lost its season opener to Indiana, fans flooded Louisiana Governor Edwin Edwards’ office with letters and phone calls, each demanding that he step in and help get the man fired. LSU coach Charles McClendon. Edwards replied, “People should understand that the governor of this state does not hire or fire football coaches.” McClendon rebounded and LSU finished 8-4.

7. So is Meyer a legitimate candidate? I haven’t heard anything to suggest he is. Azcentral.com columnist Greg Moore wrote that Meyer deserved at least one conversation, and it’s hard to disagree. Arizona State aspired to be a top player. Meyer would do one. But the luggage with him is terribly heavy.

8. Matt Rhule? It would be good. He knows how to build programs. He did it at Temple and Baylor. He could do the same here. But it’s hard to see the former Carolina Panthers coach jumping into that situation, especially given the NCAA investigation.

9. Speaking of which, while reporting another story, I recently spoke with Tennessee athletic director Danny White. In 2021, White hired Josh Heupel, whom he previously worked with at UCF. At the time, Tennessee was under investigation by the NCAA. I asked White if that had been an obstacle during the research process. His answer: definitely. Tennessee had a ton to sell, but it also had that dark cloud. “The opportunity to rebuild this (tradition) is really cool,” White said. “It’s really cool from a sporting director’s point of view and it’s really cool from a football manager’s point of view. And that’s what I was selling. But there were definitely a lot of questions about the NCAA survey. Josh had a lot of questions about it. Everyone did, as you would expect.

10. Arizona State is not expected to receive notice of allegations from the NCAA until the end of this season.

11. Oregon offensive coordinator Kenny Dillingham is intriguing. After firing Edwards, Anderson suggested Arizona State might need someone familiar with the changing landscape of college football. Translation: someone young. At 32, Dillingham may be a bit too young, but he shouldn’t be ignored.

ASU Fan Poll: Do you think Arizona State should pursue Oregon OC Kenny Dillingham as their next football coach?

12. I was in Eugene two weeks ago covering Oregon’s win over UCLA. Dillingham made the Ducks work like they did under Chip Kelly. Quarterback Bo Nix looked like a Heisman Trophy contender. In eight games, Oregon is averaging 42.4 points, fifth best in the nation. The Ducks have allowed a sack all season. They didn’t lose a fumble.

14. I asked Oregon coach Dan Lanning about Dillingham. “He did a great job,” Lanning said. “Obviously, he’s a guy I’ve seen in the business for a very long time. Not so long ago, Kenny Dillingham was that high school coach at Chaparral High School. Sitting in a corner in a staff meeting every day, not saying a word. He’s grown so much as a coach and developed over time and obviously he’s doing a great job leading our team, our offense and these coaches.

15. Aguano has done a tremendous job taking over from Edwards as interim coach. He injected energy into the program, held players accountable and prioritized in-state recruiting. Icing on the cake, the Sun Devils (3-5) have improved. But it’s hard to think Aguano’s candidacy didn’t take a hit with the Oct. 22 loss at Stanford. It was a loss an interim manager could not afford.

16. That said, Arizona State has a new quarterback in Trenton Bourguet. The former passed for 435 yards in last week’s win over Colorado. If Bourguet rallies the Sun Devils to six wins and bowl eligibility, helping Aguano keep his job, it would be Arizona State’s best story in years. No pressure, Trenton.

17. If Arizona State goes in a different direction, the Sun Devils should do everything they can to keep Aguano on staff. Make him associate head coach. No matter. He deserved it.

18. Total honesty: I don’t know what to think of Deion Sanders. He is 23-5 at Jackson State, including 8-0 this season. He should look solid this offseason, and Sanders seems interested in seeing what’s available. He told “College GameDay” last week that while he had no intention of leaving Jackson State, he would be “a fool” not to listen. Coach Prime will have a Power 5 opportunity. I’m not sure Arizona State is that place. Sanders always seemed destined for the SEC or the ACC. He’s already been listed as a strong candidate at Auburn.

19. A name I heard recently: Jeff Monken. In nine seasons at Army, Monken produced seasons of 10-3, 11-2, 9-3 and 9-4. Overall, he is 61-47. Some people would struggle with Monken’s offensive track record, but this could be the perfect scheme for a school facing challenges in the NIL race. It’s not sexy, but it’s effective. (And Monken and other service academy coaches pointed out that they wouldn’t necessarily run a pure triple-option system if they were hired by a school with more resources.) Monken would also help clean up a program. who has struggled with penalties the past two seasons.

20. Just because Arizona State fired Edwards after Week 3 doesn’t mean the Sun Devils are close to making a decision. Many head coaches will only interview with a school after the season. It could delay things. The early signing period begins on December 21. It will be there before you know it.