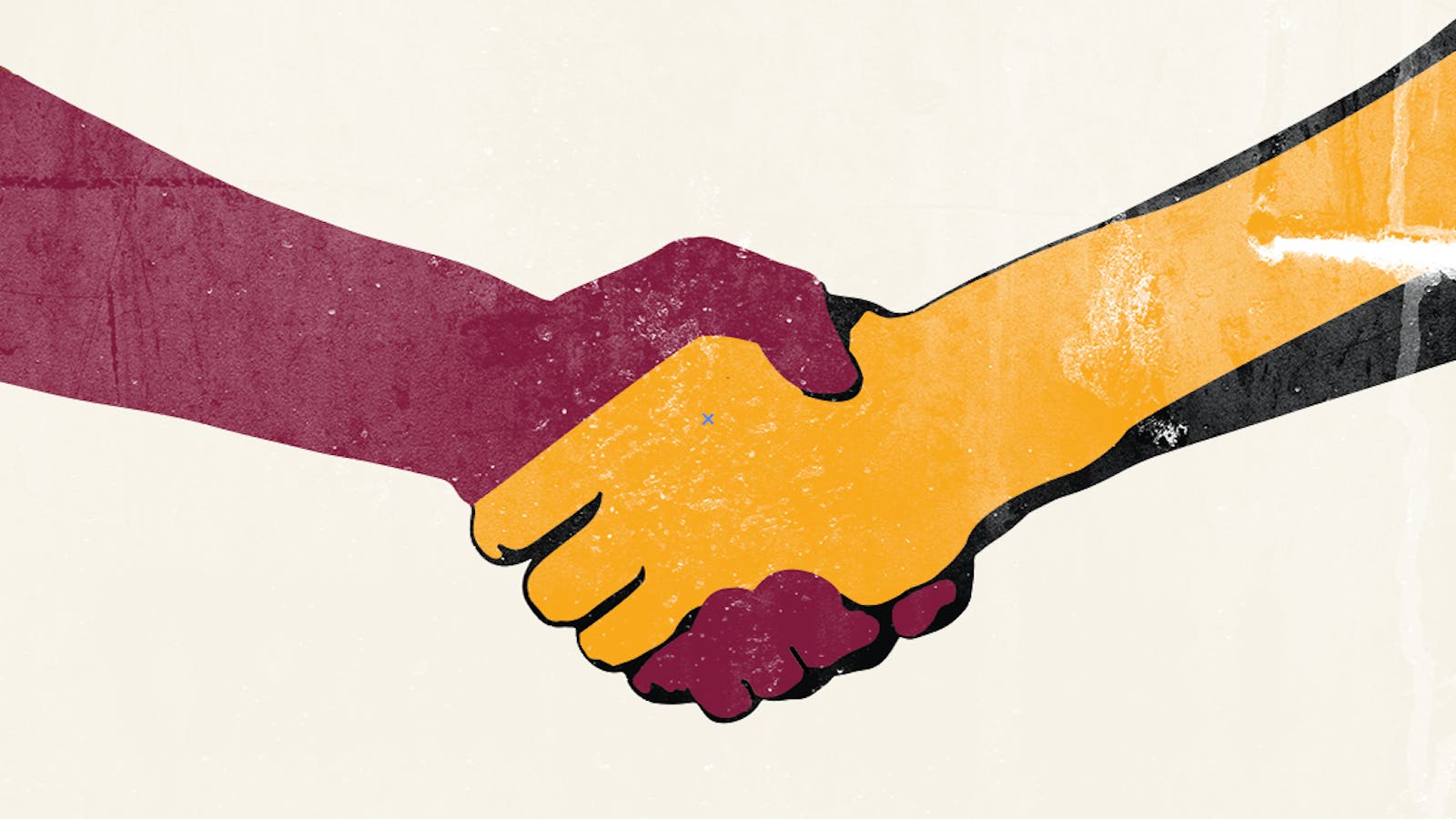 When Michael Crow became the 16th President of ASU in 2002, Neil Giuliano, former mayor of Tempe from 1994 to 2004, saw the immense impact Crow could have not only on the University, but on Tempe and the Arizona as a whole.

Giuliano worked with Crow before coming to Arizona, while the future ASU president was still working at Columbia University. Giuliano worked as director of federal and community relations at ASU before and during his time as mayor, and said he collaborated with Crow and his colleagues at Columbia.

In the 20 years since, other local and state leaders have, sometimes reluctantly, seen the impact Crow has had on ASU and the communities it inhabits. He has embedded himself in nearly every facet of Arizona politics, cultivating relationships with most political entities in the state, from the City of Tempe and the Arizona Board of Regents, to the Legislature of state and the governor’s office.

“He was seen as radical because higher education hadn’t changed before,” said Mary Venezia, NAU student regent on ABOR during Crow’s early years at the university. “Now I think when we think back to these ideas that he had, he really thought ahead of everyone else in the higher education industry.”

Flip-flops at the five campuses

Early on, Crow formed an alliance with then-gubernatorial candidate Janet Napolitano to implement one of his many changes at ASU. She said the two met while she was handing out campaign flyers outside an AJ’s Fine Foods in Scottsdale. Crow approached the store in flip-flops and shorts, she said. He and his wife were stocking up on groceries after moving to Arizona and came across Napolitano.

Shortly after, while still campaigning, Napolitano pledged to support Crow in his search for alternative funding methods for the University as the state suffered education funding cuts.

“It’s always been a challenge in the Legislative Assembly, especially getting adequate funding for state universities,” she said. “So we worked a lot together on that. And then he reached out to city leaders and really, working with municipalities, got help that the state legislature wouldn’t provide.

Giuliano said lawmakers really began to see Crow’s resolve in 2004, when Crow approached him and other local and state leaders to organize the third presidential debate between incumbent President George W. Bush and the senator at the time. John Kerry on the Tempe campus. It was an ambitious undertaking for a college president so new to the state and its political workings, Giuliano said.

On October 13, 2004, Crow and representatives of the Commission on Presidential Debates gave the opening speech for the debate at the Gammage Auditorium. According to state press coverage at the time, 3,000 tickets were given out for the debate at Gammage, 300 of which went to students. 10,000 tickets were given out to students for a viewing party at Wells Fargo Arena — now known as Desert Financial Arena — and other students participated in protests or rallies around campus.

By taking on the challenge of hosting a high-level presidential debate, Crow let local and state lawmakers know he had big ambitions for ASU’s future, Giuliano said. So when the University began to expand further into Tempe and other parts of the state in the years that followed, Giuliano was not surprised.

ASU’s downtown Phoenix campus expanded the university’s reach in 2006, followed by SkySong, the ASU Scottsdale Innovation Center in 2008. By 2014, the university had opened ASU colleges in Lake Hawaii City. The expansion continued with the grand opening of ASU on ASU in Downtown Mesa in 2020.

The university even expanded outside of Arizona in 2013 and 2018, opening facilities in Los Angeles and Washington, DC, respectively. Although ASU has had a presence in Washington since the early 2010s, it did not establish a DC headquarters until 2018.

Amid the University’s early expansion, Venezia was beginning her work as a student regent on ABOR. ABOR is the governing body that oversees Arizona’s three public universities. The board is made up of eight regents and two student regents—all appointed by the governor—and the current governor and superintendent of public instruction as two ex-officio members.

Working as a student regent required some head-butting with Crow and other college presidents, Venezia recalled. In 2008, she was working with the Arizona Student Association on a tuition freeze proposal that would provide flat tuition to students at all state universities for four years, a proposal championed by Napolitano.

Crow has long been an opponent of the tuition freeze. At a fall 2021 student forum, Crow said the University has only raised tuition by about 2% in the past 10 years, making it cheaper than others. Arizona universities like UA, which has a tuition guarantee program that freezes tuition for eight consecutive semesters.

In the end, the 2008 tuition freeze did not materialize. But Venezia helped broker a compromise by negotiating with university presidents to keep tuition fees as low as possible.

Even though the tuition freeze initiative failed, Venezia said she gained a lot of respect and insight from Crow while working at ABOR, which inspired her to continue working in Higher Education.

“A lot of the ideas he brought to the board and what ASU was doing were seen as very different. Higher education in general hasn’t changed for ages,” said Venezia. “Michael Crow came in and was like, ‘Hey, let’s change that. If there are ways we can be more efficient, we can support students better.’

In the years that followed, Crow clashed with the Regents on other issues. During a budget meeting in June 2021, Crow reminded the board of directors of ASU’s independence from ABOR and state funding.

“We serve the public and are governed by this council, but we operate in a modality where we seek partnerships, we seek revenue and mechanisms to generate revenue,” Crow said at the time.

Other officials have challenged Crow and his original ideas, according to former regent Mark Killian, who served on the board from 2010 to 2015.

“Some people in the legislature, sometimes governors, get by because a university president is strident in their advocacy to protect universities and what they do,” Killian said.

In February 2022, Crow attacked state lawmakers during his State of the University presentation at ABOR, saying the university “has failed to convince the state to invest in universities. public, at least our public universities at the level that we think is deserved.

Napolitano was a lawmaker with whom Crow reportedly had a strained relationship. Despite their early alliance, the two clashed in the final years of Napolitano’s tenure over issues such as the proposed tuition freeze, with rumors that Napolitano kicked Crow out of office at some point.

“We both have strong personalities,” Napolitano said. “And yes, we sometimes had differences of opinion, and we always overcame them.”

Napolitano and Killian agreed that Crow always did what he thought was best for the University, even if that meant battling with top politicians and government officials in Arizona.

“The legislative process is adversarial and you have people with strong opinions on each side,” Killian said. “So you can get caught up in those disagreements, but I think what Michael did was completely appropriate.”

Manson pointed to this and the University’s response to the COVID-19 pandemic as prime examples of Crow’s leadership. She called Crow’s long tenure as ASU president an “incredible testament to his leadership,” given that higher education leaders stay in office for less than a decade on average.

“And I certainly wouldn’t expect him to slow down,” Manson said. “I don’t think it’s in his personality.”‌‌

This story is part of “The Crow Issue,” a State Press magazine project that looks back on the last 20 years of Michael Crow’s tenure as university president. See the full publication here.

Reagan Priest is the political editor, leading coverage of ASU’s relationships with Arizona political entities. She previously worked as a social justice reporter for Cronkite News and currently works as a digital production intern at The Arizona Republic.

Continue to support student journalism and donate to The State Press today.